Urinary tract stones are one of the most common urologic disorders and also can be one of the most painful.  Urinary stones has been known to affect man for millennia.  The oldest renal stone was described in 1905 which was found in an Egyptian mummy in a tomb dating approximately 4400 BC.


The  removal of kidney stones was one of the first surgical procedures done.  Surgery for kidney stones was even mentionedin the Oath of Hippocrates: “I will not cut for stone, even forpatients in whom the disease is manifest; I will leave this operation to be performed by practitioners, specialists in this art.”


The kidneys filter out all waste products from the blood and excrete them in the urine.  Stones are formed
from mixtures of mineral substances namely: calcium, magnesium and phosphate plus oxalic acid (either produced in the body or from food intake), uric acid (from metabolism of animal products) and cysteine in rare occasions. Stones are formed in some people when there are too many chemicals to easily dissolve inthe available urine.  An adequate amount of water in the urine must be maintained in the kidney to dissolve the all the removed waste products.  If dehydration occurs, certain substances like calcium, oxalate and uric acid may form crystals that will eventually build up into a stone.

Symptoms vary depending on the location of the stone.  Stones that obstruct the ureter or renal pelvis cause very excruciating, intermittent pain that radiates from the flank to the groin or to the genital area and inner thigh.  This particular type of pain, known as renal colic, is often described as one of the most painful experiences one can
encounter.  Other symptoms that accompany renal colic include urinary urgency, restlessness, nausea, vomiting and bloody urine.  Non obstructing stones in the kidney may just produce a dull intermittent flank pain or discomfort.  Some stones may not produce pain and just present as recurrent UTI.  Stones in the urinary bladder cause painful urination with blood tinged urine.

The initial imaging modality is an ultrasound of the kidneys, ureters and bladder(KUB) as it is the most readily available and non invasive.  However, some portions of the ureter are not visualized by ultrasound due to bowel gas and bone.  The next imaging technique is an intravenous pyelogram or IVP which is an xray procedure where dye is injected to visualize the urinary tract.  IVP is a reliable test for kidney/ureteral stones, but it has a few drawbacks namely exposure to radiation, adverse reaction to the dye, limited to patients with normal creatinine levels and often is not able to diagnose other conditions that can cause one-sided abdominal pain.

Presently, the imaging modality considered to be the gold standard is called the CT stonogram.  The advantages of the stonogram include: no dye is needed, no bowel preparation required, not limited by renal function and able to diagnose non-urologic causes of flank pain.

​     There are various treatment options for management of urolithiasis depending on the size, location, composition of the stone as well as the renal function.  These range from medical dissolution (for uric acid stones) and medical expulsion for small stones in the lower ureter and ureter-bladder junction to ESWL, percutaneous nephrostolithotomy and open surgery. 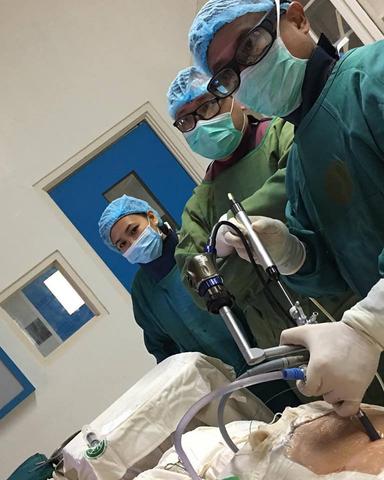